The Wild AND FREE SERIES

THE WILD AND FREE SERIES IS THE FREEFOLK WAY OF SUPPORTING OUR ENVIRONMENTAL COMMUNITY. EACH LIMITED EDITION BEER IN THE WILD AND FREE SERIES FOCUSES ON AN ENDANGERED SPECIES (OR A SPECIES OF CONCERN). WE CELEBRATE AND BRING AWARENESS TO THE SPECIES, WHILE ALSO CREATING AN EXPERIMENTAL (AND SOMETIMES WILD!) BEER. THESE BEERS ARE AVAILABLE IN A LIMITED EDITION 22OZ BOTTLE ONLY ONCE A YEAR. 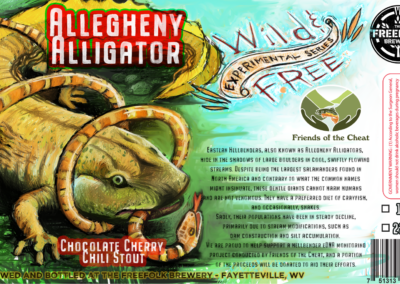 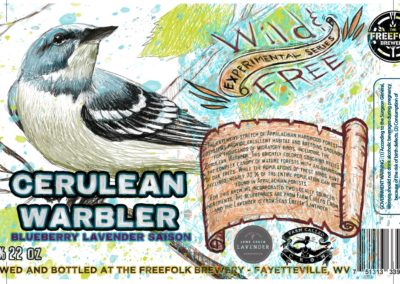 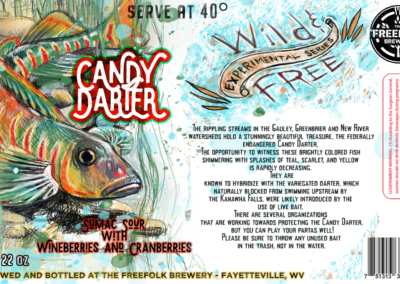 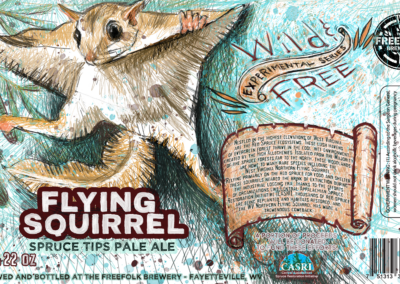 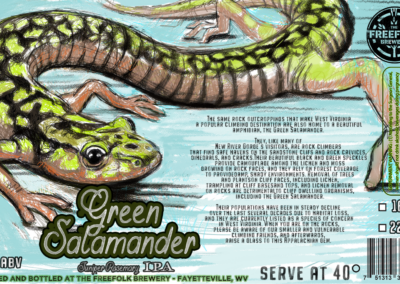 Nestled in the highest elevations of West Virginia are the red spruce ecosystems. These lush havens of evergreen forest thrive in the cool, wet environment created by the High Alleghenies.   Isolated from the majority of the spruce forests far to the north, these lush havens are home to many rare species including the WV northern flying squirrel. Relying primarily on the red spruce for food and shelter, these squirrels neared the brim of extinction during the industrial logging era. Thanks to the efforts of organizations like Central Appalachian Spruce Restoration Initiative (CASRI), thousands of red spruce are being replanted and habitats restored, and the WV northern flying squirrel has made a tremendous comeback in recent decades.  A portion of proceeds will be donated to fund these efforts.

The extensive stretch of Appalachian hardwood forest ecosystems provide excellent habitat and breeding grounds for thousands of migratory birds, including the breathtaking, Cerulean warbler. This brightly colored songbird relies on the complex canopy structures of mature forests with an abundance of oak trees. While overall numbers of Cerulean warblers have declined, nearly 70 percent of the entire population can be found in the Appalachian forests.  For this brew, we incorporated two locally sourced ingredients, the blueberries from A Farm Called Crow, located in Fayetteville, WV, and the lavender from Lens Creek Lavender, located near Charleston, WV.

The same features that make the Gauley River National Recreational Area a world-famous destination for whitewater enthusiasts also create habitat for rare plants including the federally threatened Virginia spiraea. During flood events, the swift water scours and removes many trees and large shrubs along the river edge cobble bars, providing space and light for prairie grasses and other plants to grow back from deep root systems. The National Park Service has been monitoring and working to protect the rare river scour plant communities. The next time a whitewater rapid sends you flying, pause for a moment and admire these unique and beautiful ecosystems.

The Candy Darter- Sumac sour with wineberries and cranberries (6.5%)

The rippling streams in the Gauley, Greenbrier, and New River watersheds hold a stunningly beautiful treasure, the federally endangered Candy darter. The opportunity to witness these brightly colored fish shimmering with splashes of teal, scarlet, and yellow is rapidly decreasing. They are known to hybridize with the variegate darter, which, naturally blocked from swimming upstream by the Kanawha Falls, were likely introduced by the use of live bait. There are several organizations that are working towards protecting the Candy darter, but you can play your part as well! Please be sure to throw any unused bait in the trash, not in the water, or use non-living bait for fishing.

“The Greenbrier valley holds the most extensive network of karst terrain in West Virginia. This type of landscape was formed by water slowly dissolving soluble rock types, such as limestone and dolomite, and results in many features, such as caves. Many West Virginian cave systems hold breathtaking formations, but they are also home to hundreds of organisms, including the federally endangered Virginia big-eared bat. As a non-migratory species, VA big-eared bats rely on these dark habitats in which they can hibernate during the winter and rear young in maternity colonies during the summer. Major declines in the populations are due to loss of habitat and human disturbance. A portion of the proceeds will be donated to the West Virginia Cave Conservancy, and we are proud to support their efforts to protect cave ecosystems. The butternut squash was provided by New Roots Farm, located in our hometown of Fayetteville, WV.”

Eastern Hellbenders, also known as Allegheny Alligators, hide in the shadows of large boulders in cool, swiftly flowing streams. Despite being the largest salamanders found in North America and contrary to what the common names might insinuate, these gentle giants cannot harm humans and are not venomous. They have a preferred diet of crayfish, and occasionally, snakes. Sadly, their populations have been in steady decline, primarily due stream modifications, such as dam construction and silt accumulation. We are proud to help support a hellbender eDNA  monitoring project conducted by the Friends of Cheat, and a portion of the proceeds will be donated to aid their efforts.

White walnuts, better known as butternuts, historically grew throughout eastern North America. They were cherished for their beautiful wood, the bark and nut husks that produced yellow dyes, and oily, flavorful nut kernels. Sadly, a disease introduced from non-native walnuts has imperiled the species throughout its range, and it is a species of concern in West Virginia. Butternuts are an important part of our native forests providing food and habitat for many species, including the charismatic hickory horned devil, a caterpillar of the regal moth. We replaced all water for this brew with maple sap and used maple syrup during fermentation, both of which were provided by Blossom Hill Farm, located in Victor, WV.

The same rock outcroppings that make West Virginia a popular climbing destination are also home to a beautiful amphibian, the green salamander. They, like many of New River Gorge’s visitors, are rock climbers that find safe havens in the sandstone rock crevices, dihedrals, and cracks. Their beautiful black and green speckles provide camouflage among the lichen and moss growing on rock faces, and they rely on forest coverage to provide damp, shady environments. Removal of trees and plants on and around cliff faces, trampling at cliff bases and tops, and lichen removal on rocks threaten these cliff dwelling organisms, including the green salamander. Their populations have been in decline over the last several decades due to habitat loss, and they are currently listed as a species of concern in West Virginia. When you are on the rocks, please be aware of and protect our smaller and vulnerable climbing friends, and afterwards, raise a glass to this Appalachian gem!